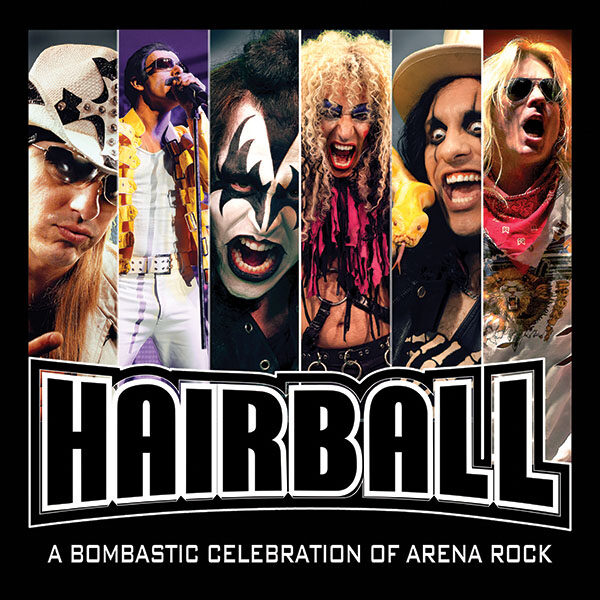 “WELL WORTH THE 4-HOUR DRIVE! SERIOUSLY THE MOST FUN I’VE EVER HAD AT A CONCERT!”
— Robyn DeJong VanderSys

Hairball is more than just a band – and certainly more than a tribute band!

Hairball is a Rock & Roll experience you won’t forget. A band puts on a concert – Hairball puts on an event! The lights, sound, video screens, smoke, fire, blood, bombs, confetti, spiders, snakes & monsters (oh my), and the screaming hoards of rabid Hairball fans create an event – an event that hits you so hard, it’ll take a few days to recover! Rock & Roll will NEVER die!!!

Vocalists Bobby, Kris Vox, and Joe Dandy lead the band through a 2+ hour, mind-blowing, and drop-dead accurate homage to some of the biggest arena acts in the world. Van Halen, KISS, Motley Crue, Queen, Journey, and Aerosmith are but a few of the acts fans will see brought to life. The Hairball stage becomes an entirely new rock concert before your very eyes countless times throughout the night.

The motor that drives the Hairball dragster consists of HBK on the electric bass, Billy on the drums, and Happy on the lead guitar. These Rock & Roll soldiers pride themselves on nailing some of the most memorable licks and chops of all time while adding their own style and flare that they’ve cultivated over decades of tireless performing. These guys live and breathe Rock & Roll!

2018 finds Hairball celebrating its 18th year of rocking hundreds of thousands of people across the country. Every day it adds more characters, more pyrotechnics, more lights, more sound, more props, more surprises…more everything! While Happy often tells the audience “Today is the first day is the rest of your life!” Hairball performs every show as though it could be it's last. Every night is a 100% full-on, no-holds-barred, exciting, chaotic, fiery party that has to be experienced to be believed!

As important to Hairball as the music are its fans. While many bands claim to have the best fans in the world, Hairball actually has! Whether they’re 8 or 85, Hairball fans bring unparalleled enthusiasm and energy to the show that completes the Arena Rock experience. Hairball knows it wouldn’t exist without its fans, and takes every opportunity to let them know that. Whether it’s a pre-show meet and greet, hanging out at the merch booth, or chatting online, Hairball has a lot in common with its fans and it’s always a good time when they get together.

Don’t confuse Hairball with the countless “’80s Tribute” bands across the country. Hairball is an event; an attitude and expression of music and showmanship that isn’t a retro-flashback. It’s a way of life…and it’s not going away!